Exploring spirituality in the urban frame. 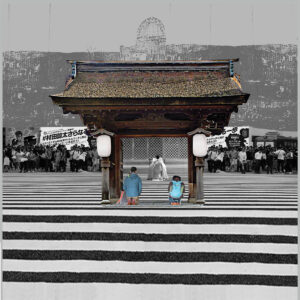 You may like it or not, you cannot escape religious monuments and the way they impose their presence in the urban frame. They contribute to the city “imageability”, as defined by Kevin Lynch (1), and play a predominant role in its identity.  Their symbolic significance goes far beyond their original mission, as shown by the emotional response triggered by the devastating fire of Notre-Dame de Paris in 2019. No matter the faith or belief, the collective response expressed the sense of losing some of our intangible legacy. However, can we claim that religious monuments enhance our common “sense of place” and contribute to the challenge of urban resilience?

The restoration and renovation program of the “Augustine’s monastery” (2) in Quebec City, Canada, a 42 million dollars investment, provide some interesting insights. Next to the legacy of their religious and cultural mission, the commitment of the monastery in the social life of the city has been developed within a well-defined sustainable approach. Introducing themselves as a place of welcome, hospitality, memory, rest and renewal, their modern design coupled with a repurposing and reuse of existing buildings and materials suggests a strong sense of sustainability.  The role played by worship places in our urban environment is explored by de Wildt & Al (3) who reviewed the transformation of religious architecture in Germany. In a comprehensive study, churches, mosques and synagogues were compared in terms of visual shape, orientation, connection to non-religious motivations and to socio-cultural contexts. Some could argue that restructuring the urban landscape is not in itself a proof of adaptation to our evolving environment. But at the same time, an urban fabric persistence over the years does not reflect per se a socio-engineering inertia. As argued by H. Noizet (4), with a detailed analysis on the way the Parisian Saint Victor abbey (12th century) turned out to become one of the most important university campuses, such persistence may witness an ability for adaptation. To say it differently, the morphology persistence could be consistent with a re-appropriation process for new usages which as such could demonstrate the resilience of the place.

Interestingly, the desired balance between urban sustainability and resilience (5), translates here into an “original” dimension. How can we see the role of religions through their architectural heritage? For millennia, mankind attempted to build connections between physical and spiritual worlds with a significant influence on city patterns. Religious values have been transformed into urban shapes, witnessing a common culture through a shared legacy. In a study dedicated to Buddhism architecture, Zhang & Wei (6) explore the way religious spaces in Lhasa, Tibet, are linked to social order and how they are divided in different groups depending on their relationships with others.  But are such values, though highly respectable, consistent with the required conditions to engage with urban resilience? The legacy of impermanence, deeply rooted in both Buddhist and Shinto traditions, influences the relation with nature in such a way that environmental issues are not “human centered” but seen as the presence of the “sacred” in all what nature is (7). Accordingly, any disaster can be viewed through the lens of Buddha willingness and perceived as a transcendental decision, leaving little attitude for reconsidering the socio-economic fundamentals shaping hazards into disasters. In the same vein, the meaning of destruction can be questionable when seen as a purification, an opportunity and possibly a necessity (8). As such, the awareness of a limitation in duration enables to change our value scale and may introduce the required critical thinking for improving our socio-ecological systems. Ephemerality enhances what is worth, objecting the idea of a duration “aiming at truth”. However, opposing the essence of spirituality, religions are embedded in ideological dogmas, with traditions referring to untouchable and conservative principles. Rather, urban resilience should possibly help us by reconsidering what is taken for granted when this helps to improve the well-being and well-living of people together.

The sense of belonging, social connectedness and transcendental aspirations may coalesce in a holistic relationship between people and their built environment. Intertwining nature and spirituality may pave the way to sustainable thinking. But dealing with uncertainty and complexity requires not only a capacity to adapt but also to transform. To build successfully such transformative process, a human centered commitment is unavoidable. Undoubtedly, this questions the way religious architecture should be seen: either as a historical legacy or as a “manifesto” where spirituality contributes positively to bouncing forward when urban disasters strike.

In the below work, an anonymous crowd in all its diversity and materiality confronts the ambiguity of worship.

1 thought on “Exploring spirituality in the urban frame.”