The Sense of Vulnerability. 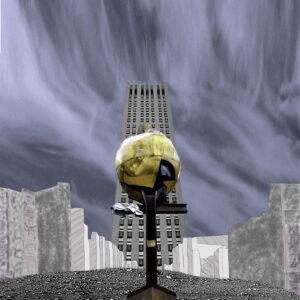 The Anthropocene awareness and its induced damages strengthen the concept of (urban) resilience, often presented as the new panacea for improving our daily lives. Much has been written on resilience, be it from the engineering or socio-ecological point of view; but the notion of vulnerability, often too quickly seen as the opposite of resilience, is equally worth to be better appraised. Vulnerability can be seen as the linking point that will possibly translate hazards into disasters. In a recently published book, and definitely a benchmark reference (1), Ilan Kelman details the factors that may create vulnerabilities and why disasters reflect our inability to deal with hazards. The lesson learned from this book on our collective responsibility in translating hazard into disaster is beyond dispute and nowadays recognized by most institutions (2). Understanding the creation and the development of vulnerabilities appear to be complex as being determined by our own choices and behaviors. But interestingly, there is little focus on the way societies perceive vulnerability, and where the cursor should be positioned between hazards and disasters in terms of perceived risks, depending on culture, traditions, and socio-economic environment. To a certain extent, that should not be limited to a mere question of semantics, the word “hazard” shows meaningful nuances which are not always easily translatable (3). How we perceive the meaning of a word is often linked to cultural specificities, as in the example of Japan and its Shinto traditions: rebuilding and destruction are intertwined and the latter may be seen not only as a disaster, but possibly as a purification, an opportunity or even a necessity (4).

Beyond wording, vulnerability may also be perceived differently depending on community social “capabilities” as explained by S. Beccera & Al (5) who studied the response to water scarcity in Sahel. Taking up the theory developed by sociologist B. Lahire, based on the heterogeneity of social worlds in which the individual’s experience and patterns of action are rooted, the authors explore the willingness/unwillingness of people to reduce risks. In the case of Hombori, a small village located in Mali, water scarcity is seen as a seasonal problem with no lasting solution. Vulnerability is perceived as part of the daily life and the adaptation process is based on reducing consumption at the individual level without any long-term adaptation strategy for the community.

However, stating that vulnerability perception may distort our judgement to scale up resilience deserves some more thinking. In the case of Hombori, the socio-spatial organization (how close are the wells, who is socially entitled to go there) may explain how the village inhabitants live with the drought risks and limit the impact of water shortage. We also tend to forget that the heterogeneity of socialization principles needs to be understood timewise: for thousands of years, aboriginal communities used traditional burning to prevent wild fire developments, a technique considered as obsolete by Australian authorities. Whether right or not, no one can conclude that the way fire risks were perceived in those ancient times demonstrates a distorted appraisal.

Our perception of vulnerability facing hazards of “natural” origin may lead to undesirable or inappropriate conclusions. Mostly linked to our socio-economic environment, perceptions are also influenced by fears or phobias affecting our judgement. We have all in mind a dreadful representation of the Vesuvius eruption that buried the city of Pompeii under incandescent lava and suffocating gases. But contrary to a widespread belief that all inhabitants died, it is estimated that the number of casualties was limited to those who could not afford to leave, mostly emancipated slaves. The wealthiest escaped the city before the eruption, given the fact that the area was subject to regular earthquakes during years (6). Already in 79 AD, the Vesuvius eruption did not affect everyone equally.

Also impacting daily lives, our (urban) environment needs to deal with hazards generated by our own choices and far from any possible natural origin. Fukushima is still present in everyone’s mind. But how do we perceive our vulnerability in the aftermath of such disasters? Do we change and adapt in a way that could improve our well-being for the years and generations to come? Good common sense could command but the ability to realize that our way of life is unsustainable seems hopeless. In 2001, the terrorist attack of the World Trade Center ushered in a new urban life era. The emotional load linked forever to September 11th is such that we overlook our collective responsibility, obsessed by a high rise tower urbanism. Most answers to address the risk on the built environment (7) were practice driven and could only encourage keeping on building as high as possible with no perception of our vulnerability drivers. Twenty years later, we have forgotten that the twin towers we built were easy targets and downtown NYC still faces the paradox of ever growing luxury skyscrapers in a highly vulnerable place.

The below work speaks about our illusions of strength and power and at the same time shaping our vulnerability. Framed by the perspective of a Pompeii street, the Atlas statue of The Rockefeller Center, NYC, seen as a metaphor of our dreams to equal Olympian Gods, has been replaced by two iconic pieces which I photographed after September 11th: The Cross built with the debris of the twin towers and The Sphere, a sculpture of artist F. Koenig, originally located at the World Trade Center.