Venice: the failure of resilience. 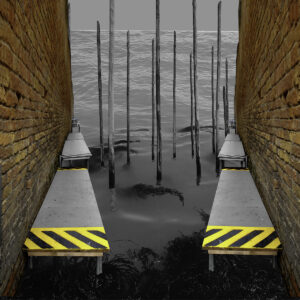 When Giovanni Antonio Canal (1697-1768), better known as Canaletto, painted the Canareggio canal of Venice, could he guess that he would contribute, three centuries later, to challenge the city’s sustainability? As an artist dedicated to a rigorous representation of his native city, both in terms of geometry and perspective, the way he mastered the use of “camera obscura” (1) happened to develop into a scientific evidence of the rising sea level. We should give credit to the creativity of D. Camuffo / G. Sturaro (1), who used the height of the algae traces on the palazzo facades as an indicator, comparing what Canaletto painted in 1735 with the same facade three hundred years later. Unfortunately, we all know the conclusion: the trend looks irreversible, and will probably worsen due to climate change consequences. Coupled with the ground subsidence, Venice lost around 25 cm of relative height to the sea level in one century. The regular city flooding, known as “acqua alta”, seen by many as being part of the Venetian life, has increased in intensity and time (2). It impacts the daily life and damages buildings. Facing such hazard, hopes hang on a project for which both final cost and efficiency are questionable. The so called MOSE project (3), a $ 6.5 billion sea wall of 78 mobile gates stationed at three different inlets raises issues on its ability to mitigate high tide levels and on its consequences on the marine environment. In addition, the fragile Venice is threatened by mass tourism with more than 20 million visitors each year, to compare with a permanent population in the historical center of less than 300 000 (4). Thereof a vicious circle with tourism encouraged by local authorities to finance the city maintenance, and in the same time, contributing to its gradual disappearance.

In such circumstances, is there any hope left for resilience and sustainability? Not speaking of the hypothetic sea wall protection, where are the evidences for flooding adaptation? In 2018, 70 % of the city was under water during the acqua alta period (5). And the only sign of engineering adaptation is the network of elevated wooden pedestrian walkways. It enables the city not to compromise with its daily operations and as such complies with a definition of urban resilience. But its outcome looks rather dubious. What will happen when the tide level exceeds the walkways height? And what is the logic of resilience if it is not sustainable? Standing poorly in front of an unparalleled architecture, for which Venetian authorities sign a wishful commitment in 2012 (6), walkways witness a hopeless paradigm leading nowhere.

In the below work, two walkways aligned on palazzo walls lead us to the lagoon. The (lack of) perspective creates a sense of enclosure. The stagnating algae of the first plan recall both Canaletto’s work and the ecological damages, while the wooden pilings of the background prevent any possible escape.