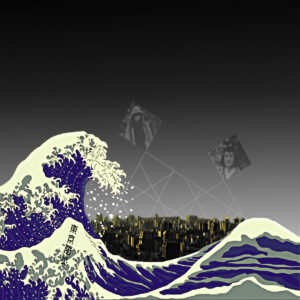 Centuries of earthquakes, typhoons, wars and fires. But a flourishing Tokyo which, undoubtedly, is a success story, at least seen from the economical perspective. Facing a level of natural threats, probably one of the highest in the world, the country has developed a network of infrastructures and communication tools, second to none, backed by a risk management culture that can be seen as the example to follow. But a better understanding of the historical background of Tokyo transformation since the Meiji restoration of 1868 is needed to appraise its “resilience level”. In her contribution to “The Resilient City” (1), Carola Hein underscores the lack of innovation when Japanese rebuilt their cities, bouncing back to the traditional forms of fragile wooden based constructions. The new buildings were erected quickly, but not in such a way to better withstand flooding or earthquakes. And overtime, the new modern architecture which characterizes cities like Tokyo needs to be seen in the framework of a political and societal change, moving from a traditional city to one amongst the most modern, whatever its disruptive environment.

The Japanese culture of risk management is almost a second nature. A striking example is probably the “Disaster Map Exercises”, a training proposed to both adults and children, where responding to major disasters as earthquakes is based on community behavior while having also fun during the preparation phase. An extensive report of the World Bank (2) details not only the organization and regulations in place but also the way NGO’s contributes with art and games.This being said, such remarkable risk management does not mean per se that “urban resilience” applies in Japan the way we understand it. The legacy of impermanence, deeply rooted in both Buddhist and Shinto traditions, influences the relation with nature in such a way that environmental issues are not “human centered” but seen as the presence of the “sacred” in all what nature is. (For those of you willing to have more details on the relation between nature and religions in Japan, have a look at (3)). Accordingly, any natural disaster can be viewed through the spiritual lens of Buddha willingness. As explained by R. Languillon-Aussel (4), the meaning of rebuilding might be influenced by the meaning given to destruction. The destruction is not seen as only a disaster, but also as a purification, an opportunity and possibly a necessity.

The ephemeral dimension asserted by Japanese traditions refers to untouchable religious and conservative principles, whereas urban resilience should possibly help us by reconsidering what has been taken for granted when this helps to improve the well-being and the well-living of people together. No doubt that Tokyo is amongst the best, if not the best city, to face a quake and bounce back to the level of balance that prevailed before the hazard. But is this really urban resilience? The below work raises the following question: Can urban resilience be overwhelmed by the Japanese impermanence?