Are cities fragile or vulnerable?

The question can surprise but it is not just semantics. The difference between fragility and vulnerability has been thoroughly discussed and it goes without saying that this post doesn’t aim to cover the diversity of fields where both concepts apply. But seen from the point of view of the urban citizen, it is worth to consider the question which may help to clarify two different concepts.

In 2005, Vale and Campanella published “The resilient City” (1) with the contribution of 17 experts having studied how cities were able to withstand major disturbances over time. Compared to a very limited number of “physical” disappearances (Pompeii being one example), a plethora of cases are found showing that cities can survive the whole range of disruptions, ranging from earthquakes, fires, wars to economic turmoil: New York (post September 11th), Washington DC (post 1814 British Invasion), Berlin (post 1945), Warsaw (with three waves of destruction), Guernica (post 1937 bombing), Jerusalem (4000 years of wars and disasters!), Mexico City (post 1985 earthquake), all of them, with their specificities, were able to reborn from their ashes. At this stage, the conclusion seems to be clear: There is no evidence that cities are increasingly fragile over time. But can we conclude that they are resilient?

A similar question was raised in June 2018 when “Oeuvre Durable” (2) launched an online debate under the heading “Are cities and human systems (really) becoming increasingly fragile in the face of disasters?”. Though no formal evidence could be brought forward to answer positively, however, 73 % of participants concluded that cities were indeed becoming increasingly fragile. Thereof, another question: How can we explain such paradox?  Was the majority of participants (including your humble servant) overwhelmed or at best influenced by Medias and inaccurate information?

But is this really a paradox? Describing the city continuity over centuries, whatever its disruptive fate, and concluding that the city is not fragile only because it did not disappear seems quite challenging. Is there any alternative? Do all people leave a city in case of quake? Do they never return to their settlements when the war is over? Do investors neglect financial opportunities when a post disruption area is for sale? Fukushima area might be forbidden but when decontaminated, does it make sense to say that the place is not fragile over time if inhabitants come back home? What looked to be a paradox turns out into a form of syllogism…unless the definition of “city” enables to understand that the paradox is apparent.

Enlarging the engineering approach to a more general one, including the socio-ecological dimension may help to understand the difference between a fragile and a vulnerable city. The fragility can be described factually: a building is fragile when its resistance features fail to comply with the pressure of an external constraint. If the pressure is too high, the building will collapse. The vulnerability will put the risk in perspective of the hazard: a building in a flood area will be at risk but depending on how the hazard is anticipated (information of population, preparedness maps, presence of levees, elevated structures …), a risk mitigation and/or adaptation can be implemented. More generally, as expressed by OD Cardona redefining vulnerability and risk from a holistic perspective, Vulnerability may be defined as an internal risk factor of the subject or system that is exposed to a hazard and corresponds to its intrinsic predisposition to be affected, or to be susceptible to damage. In other words, vulnerability represents the physical, economic, political or social susceptibility or predisposition of a community to damage in the case of a destabilizing phenomenon of natural or anthropogenic origin (3). By putting the risk into perspective and acknowledging the importance of the predisposition, the notion of vulnerability helps to improve our fragility awareness. And raising the consciousness level may contribute to decrease the risk consequences. Interestingly, this awareness level is often criticized as being the result of a perception as opposed to a factual narrative. Such criticism underestimates the difference between an objective and a subjective perception. A pure philosophical approach would probably lead to conclude that there is no objective reality we can discern, and that all reality is subjective. But as an urban citizen, if the mayor of my town is not able to elaborate on his environmental objectives, though pollution increases, I do not need an indicator to conclude that my city is at risk. In such a case, my objective perception will be factual, contrary to a subjective perception which is nothing but a feeling.

Are cities fragile or vulnerable? In the below work, an urban space is in a state of abandonment. Paradoxically, its infrastructure looks resistant, but the absence of future possible prospects increases its fragility level. By acknowledging a hidden potential for this derelict space, the artistic appropriation of S. Gupta offers to urban citizens a new state of balance, an urban gallery, helping to re-stabilize the place … though still vulnerable (4). 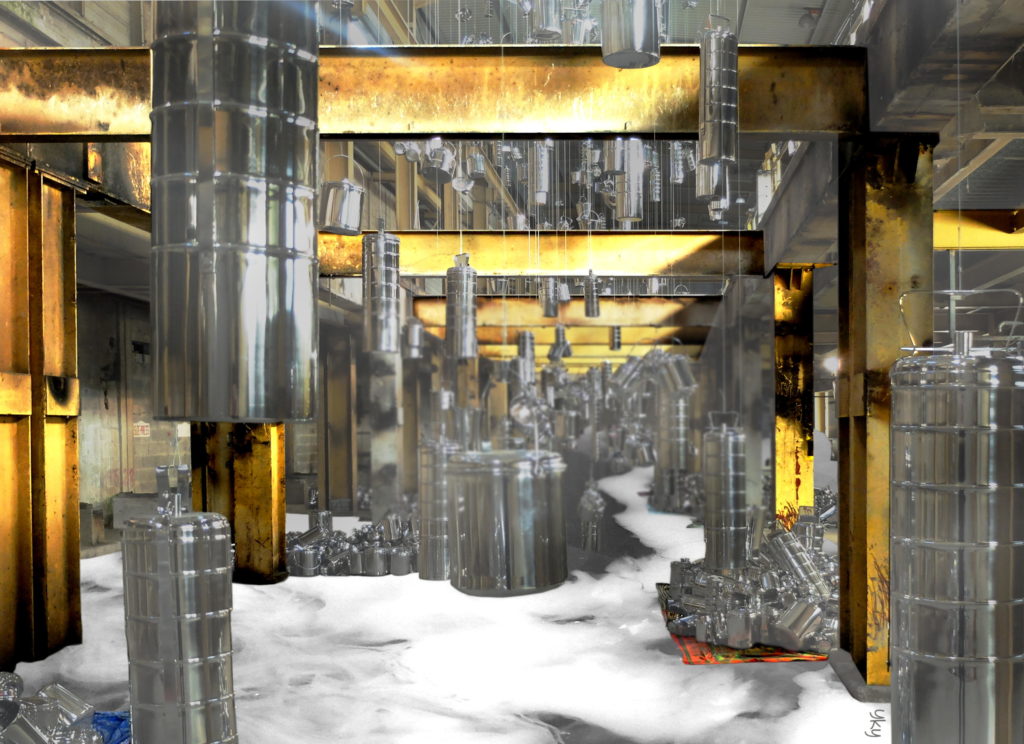 (4) Inspired by the work of Sudobh Gupta, Galeria Continua, 2016

2 thoughts on “Are cities fragile or vulnerable?”